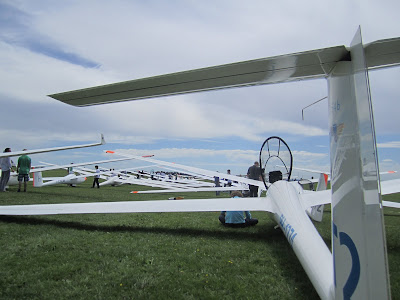 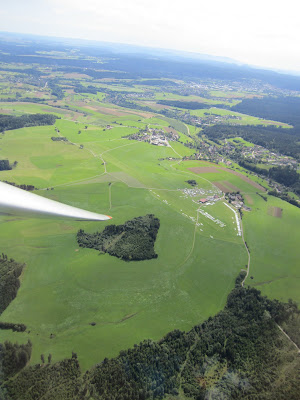 This is how the sky looked as I was strapping in for my flight today. Before starting the launches they opted to change from the A task to a 170km nominal AAT task, shortened from 3hrs to 2 hrs. I was partway through the grid and counted 20 gliders in a gaggle together shortly after launch. Right after launch I was quite happy to find a weak thermal that kept me at release altitude a small distance away from the gaggle. It didn't take long for it to die though and I was forced to join a large group of gliders. The discouraging part was that at 1800 feet I was above most other gliders in the group. It continued like this for awhile. They finished launching the Club Class but opted to hold the launches for the Standard Class. We had 46 gliders in two or three thermals around the airport. The centers that people were flying in kept shifting, so gaggles of 25 or more gliders would be centered, then shift. After the first few gliders landed back they had the sense to cancel the task. Many gliders began to land all at once, so being one of the higher gliders I decided to stay airborne as long as possible. An hour or so later the day finally began to build as the temperature increased, and when I finally decided to land it took me awhile to come down. It felt like a better airmass was moving in which made me feel rather optimistic. However, talking to a few of the teams around the field apparently the weather prognosis for the next few days is not terribly optimistic. I also took the time to test out my bug-wipers. Pretty nifty!

Also take a moment to check out the latest movie from Hubi from yesterday's activity: http://www.youtube.com/watch?v=_-ABw_AKIdM
Posted by Unknown at 10:02 AM