Selena's addendum:
In the morning Johno, Chris and I gave the glider a good wash and polish. By the time we were done I was afraid that I would drop the wings when we were de-rigging they were so slippery! Then we got to work on the instrument panel. This picture demonstrates a bit of Chris's dedication. 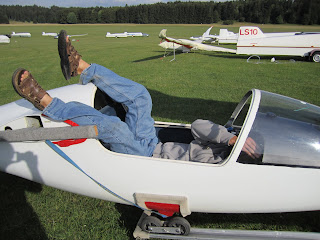 We also spent some time hanging out around the trailers, and Chris was working on his "On the grid again song". Together with one of the Swiss pilots we started getting some pretty good ideas flowing and some funny verses were sung. Unfortunately no one had a pen so they have all been forgotten and I am left with one verse stuck in my head. At one point the Swiss guy kept coming over to offer ideas while Chris was singing, and his son very politely came up to Chris and said in a very cute 5-year old Pommy accent, "Excuse me, could you please stop that? I am trying to play tennis with my daddy." 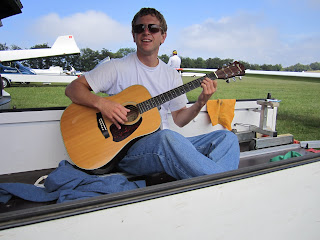 Chris's words:
Last night we were up late getting Selena's instrument panel sorted out for the contest. Her radio and GPS are now working reliably. One of the problems of renting a club class glider is they rarely come well equipped.
The contest has been canceled at least officially because of the accident two days ago. They are still giving tasks and launches but no scores will be made available. Today the weather looks good and Selena is on task at the moment.  We will update you on how she does later in the day.
Posted by Chris at 6:10 AM