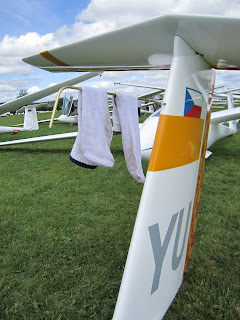 The fields were pretty wet this morning. So much so that Johno decided to use his pitot tube as a clothes line to help dry out his socks. Nonetheless the sky built early and they set us off at the scheduled 12 o'clock launch time. 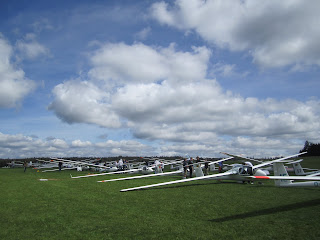 It was a busy start gate. It took me some time to find the Australians and once I did I tried to stick with them. I soon found myself flying amongst several gaggles, at one point sharing a thermal with approximately 25 other gliders (it's hard to count that high...). It was a fun start! Johno set out early because he got sick of the gaggling so Matt and I made our start at a similar time. I tried to follow Chris' advice to stick with a group of people. I was following behind a small group and had a great run out and from the first turnpoint back towards Musbach, only turning a few times. Following others was a great way to learn and I saw how much faster I need to fly in good conditions. Johno was ahead of us and was telling us that the conditions were dying in a blue hole ahead of us. I knew that there was a need to start gearing down as I approached this hole. I found myself in a thermal with a few other gliders. Two of them got to the top before I did, and one of them was Sebastian Naegel. I took a few more turns and left a thermal about 200' below them, hoping that keeping up with the group would be advantageous. I hesitated partway out, hoping to get a climb as I was starting to get low. Unfortunately there was nothing to be found. I saw another glider and tried to find a climb with them, but we were only circling in sink. I decided to set off towards one more solid looking cloud hoping to get a climb there, but was unable to connect. I was the first one to land out today. The biggest mistake I made was not gearing down fast enough for the changing conditions.
Tonight is a German night and they are serving sausages, cheese, and apple wine. Half of the Club Class landed out and all of the Standard Class so hopefully people will be back shortly to enjoy the international festivities.
Posted by Unknown at 10:25 AM