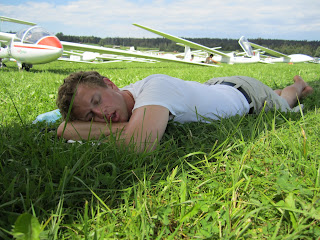 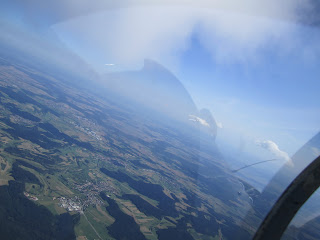 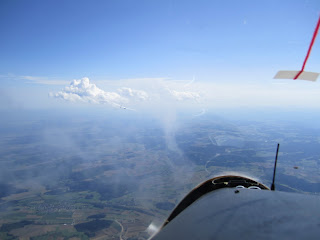 We finally joined a gaggle "low" in the first turnpoint (by low I mean 1600m higher than we have been getting most of the rest of the comp!!). I was following behind a group of other gliders, and was hesitant because I was much lower than them. Nonetheless I managed to get final glide partway along the second leg! How cool. I realised I was going to be a bit over time so initially thought I would just clip the second circle. When I got there there was a massive cloud leading right on track into the turnpoint so I followed it further in, gaining altitude, speed, and distance (how sweet!). I then turned for home, still above final glide, and cruising along well. I reckon I still could have flown a little bit faster as I finished 300 feet high. It was a neat finish and I hope someone got a photo or two because I was on final with 5 or 6 other gliders! Just in time for a good landing and a cold beer. I finished the day in 15th place with 74kph (still 20kph slower than the winner, unreal!). I need to fly more consistently. (Although I have never had this problem before...) Unfortunately points from the day were severely de-valued due to the short task time and distance. Tim Kuijspers from the Netherlands has moved into first place ahead of the Germans so hopefully he can hold his lead today! Andrew Maddocks also had a great day finishing in 9th place!
Posted by Unknown at 11:32 PM