Sorry for the delay in updates to this blog. I have not been able to get internet access at all for the last 10 days. Today is a non-flying day and so I will finally take the opportunity to give you all some updates!

I landed in Germany and within a few hours was at the gliding club in Ober-Moerlin. Within minutes of that I was in a plane having a scenic tour of the local area. Unfortunately I don't have the camera that I captured some good shots from. Except for two days, the weather was absolutely terrible for the two weeks after I got here. I made a visit to the German Aerobatic Championships and was able to enjoy two delightful days of constant rain (rain, not drizzle). However, I did get to visit many gliding fields in Germany and Switzerland.
After two long days on the train and in a car I managed to retrieve the VW Golf from Ulm, kindly lent to me by Ruedi and Uschi Benz, and the glider from Frankfurt, kindly rented to me by Gerald Salzinger. (Many thanks to all these people who have helped me!!) Two days after that I picked up Chris and our caravan from Stuttgart, and everything seemed to be coming together. The only thing that is mildly embarrassing is that the rego on my glider is pink. (It's already bad enough that I'm a girl that flies...)
When I picked up the car Ruedi took me for a short 20 minute flight of the area around his club, FSV Gerstetten. Cloud bases were pretty low, but the area around Ulm is beautiful. On our short flight we were able to see seven different gliding clubs with a cumulative membership of around 1000 people (roughly the same amount as all of Canada!). It was pretty crazy. I felt like the small-town girl who suddenly found herself in the big smoke.
When I arrived in Klippeneck I was happy to see that Matthew Scutter, an Australian competitor at the World Juniors, had also already arrived at the airfield. We tried to get some flights in all of last week, but unfortunately many days it was overcast and raining. I did manage to get one short flight in, and Matthew did manage to get in one two-hour flight. 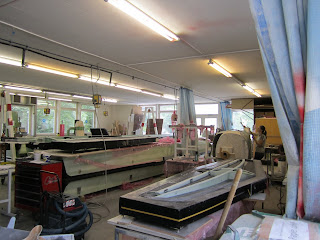 Unfortunately Matthew found some problems with the aileron controls of his glider. Initially he was intending to take it to the DG factory, but I managed to convince him that my friend Jonas Schwengler (who I met in Australia my first year) should have a look at it first. Jonas is a member of the Akaflieg Stuttgart, and knows an incredible amount about fixing gliders. Sure enough Jonas and his colleagues were able to diagnose and fix the cause of the problem! And Chris and I also were given a tour of the Akaflieg. Some of the prototypes that have been designed by this Akkaflieg are the FS 24 "Phonix" (the first fiberclass glider), FS 29 "TF" (with variable wingspan in the air), and the FS 31 (the cockpit was used for the ASH 25).
Posted by Unknown at 6:37 AM